The 6th Special Exhibition: One day, Japanese troops came, and … 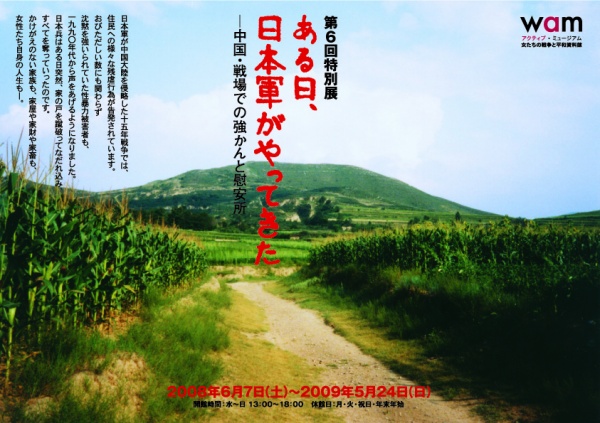 During the so-called 15 year war between China and Japan in the 1930s through until 1945, the Japanese Army has been charged with its many atrocities that it inflicted upon the Chinese civilian population. Wartime rape is among such atrocities. Chinese rape survivors who were compelled to keep silence finally began to come forward and tell their experience of rape and sexual slavery. In Yu district in Shanxi province where Chinese armies continued their tenacious resistances against the Japanese occupiers, the Japanese Army launched genocidal war involving a total destruction of villages. In the memories of the rape victims, one day, the Japanese Army marched into their villages, broke into their house, plundered the livestock and other valuables, and raped them, forever destroying the life of their family and themselves. The Japanese troops seized and detained many young women as sex slaves within or near their military bases.

During the 1990s, sixteen of these rape survivors sued the Japanese government in the Japanese court and their testimonies backed up by other supporting evidence have been kept as legal records. Also, researchers have sought to uncover massacres and numerous rape incidents that occurred in Nanjing through interviewing survivors and witnesses.

This exhibition presents some such research results, including the testimonies of many former Japanese soldiers who committed and witnessed atrocities. Finally, recent investigation exposed the fact that there were at least 64 ‘comfort stations’ in Hainan Island. Among the women belonging to a minority group from Hainan Island who were forced to offer sexual services, eight of them joined to file a lawsuit against the Japanese government, which is still in litigation. The exhibition of photos and testimonies of the rape survivors, their families, Japanese soldiers, and other witnesses reveals various types of wartime rape and highlights horrors that the victims and their families experienced.